Bring back the school desk! 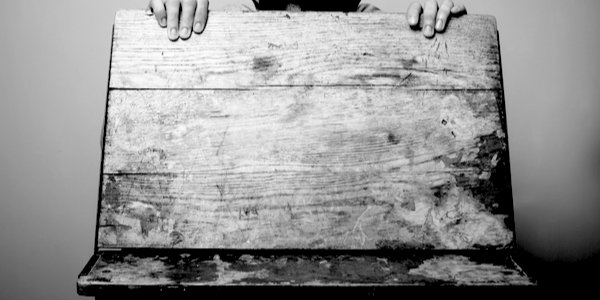 WE need to get the largely forgotten school desk back into primary school classrooms if we are to beat the coronavirus and get the economy moving again. As simple and as old-fashioned as it sounds, it is the most obvious way to ensure children stay apart from each other.

Teacher-led lessons based on pupils sitting behind desks, in rows and facing the front, fell into disrepute decades ago in the UK. In her book Seven Myths about Education, Daisy Christodoulou noted that Ofsted inspectors favoured child-centred group work over any form of didactic teaching. Small wonder, then, that desks have never made a comeback.

Teachers, brainwashed by their training into unquestioning belief in the sanctity of ‘discovery learning’ and group work, long ago ditched the desk in favour of shared tables. There are few primary school classrooms these days that are not organised into five or six sets of tables pushed together.

Many children end up with their back to the teacher, wherever she, and occasionally he, may be standing. During ‘lessons’ the teacher and the necessary classroom assistants scurry between the groups. The different groups may or may not be doing the same thing at the same time and, equally, may or may not be of similar ability.

This form of classroom organisation has probably contributed more to the decline of standards in our schools, as measured by international comparisons, than any other post-war development in education. It forces teachers into adopting ineffective, sometimes useless, child-centred group work. According to the OECD, and with the possible exception of the United States, we are the only country in the developed world where grandparents outperform their grandchildren in basic skills.

How different things are in the superstar education systems of the Asia-Pacific, up to three years ahead of us by the age of 15 according to the OECD and a BBC investigation.

Seventy years ago, most Singaporeans were illiterate. In the likes of Singapore, Shanghai and South Korea today, whole-class teaching is de rigueur: so 21st century! The classroom layout with rows of desks facing the teacher is as ubiquitous there as it is an aberration here. Nor is pupil behaviour much of a problem there. The more widespread disorder and disruptive behaviour in our classrooms is partly a function of how we organise the furniture.

Old-fashioned desks with under-lid storage are the best antidote/PPE against the spread of the coronavirus. Finding them to buy, however, makes the shortage of other PPE equipment look like a minor problem. My Google search for ‘school desks’ produced 131million hits, but not of the type that today’s older generation will recall.

They do exist, however, somewhere out there. As a headteacher I recall purchasing a classroom set a decade or so ago and I have noticed that eBay is offering them for sale.

The East Asians use a mix of traditional desks and single tables, usually with a storage component. If the organisation of desks in rows facing the teacher at the front of the classroom is good enough for our educational betters, it should be good enough for our kids. What is more, in addition to encouraging a return to more effective, whole-class, teaching methods, the return of desks will do more than any other measure in schools to combat the spread of Covid-19. What’s not to like?