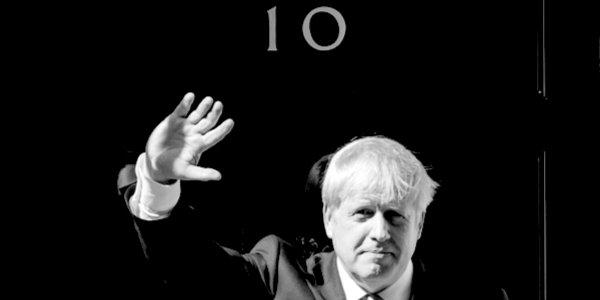 BORIS Johnson has bottled it again. He dared not unlock us. A seemingly paralysed PM gave no date for our return to freedom.

Last night’s performance revealed a man either of limited intellectual grasp and disproportionate fear or a Whitehall stooge, happy to be the mouthpiece for the ultimate in bureaucratic obfuscation. His address to the nation (was it really necessary?) had Sir Humphrey written all over it. It committed to nothing but to commit to nothing, other than a ‘push me pull you’ elaboration of lockdown alert levels, with no end in sight at all.

Will he, I wondered as I watched in growing astonishment and despair, later complain that he was duped by his advisers into leading us down the road to continued serfdom? He certainly did away with any pretence that Britain is a functioning advanced liberal democracy. He chose not to enlighten us as to the lawful grounds for our continued detention.

Patronising and designed as though for an infants’ class, this non-announcement was worse by far than my worst fears. There were no definitive dates for businesses and industries to re-open; no dates for schools’ return (despite hard evidence that they are not ‘spreader’ environments), only a promise that dates when made would not be fixed. If intended as a reassurance to teachers it can have only infuriated parents. No date was given for the NHS to return to business as normal from its Covid-only service before deaths and illness from lockdown rise any further, as they will.

This ‘sketch of the road map and sense of the way ahead and on what basis we will continue to proceed’ was a fudge – an exercise in dissimulation and prevarication. What a depressing contrast to Switzerland’s quietly announced specific and straightforward lockdown easing dates which we reported on two weeks ago and which should have been the model for us.

You can ‘go to work if you can’t work from home’, he announced airily – meaning who exactly? It was a non-specific and mixed message that turns companies and individuals hostage to fortune. How are they meant to go back to work if their children are still at home? And if there is no public transport? You can go by car, the PM said cheerily, his memory of how the other half lives perhaps dulled by his Chequers sojourn; so much so that he’d forgotten about the many workers who don’t own cars.

The coded warning really was about something quite else – far from channelling Mrs Thatcher, it was a white flag raised to the stay-at-home-loving transport unions. No, he won’t be squaring up to them any time soon. And it won’t be him – nor even the Wizard of SAGE – who’ll decide when lockdown really ends and on what terms but the public sector union bosses, stupid.

As for the five tests (funny how the comms staff insist on five ever since Blair’s election pledges) with their easy-to-understand ‘colouring by numbers’ illustrations, they are designed never to let us pass Go.

Quite arbitrary, with no reference to the crashing economy or crashing employment, based on false premises, blithely ignoring problems of the government’s own making that no matter how long the house arrest is it cannot solve, they ensure that there will always, always, be something to stop those little bikes perched at the top of the long slope from setting off on the downhill run.

The PM’s Lockdown at Animal Farm address seemed so transparently designed to cover the government’s back (we have to work harder at staying at home longer, with increased fines if you don’t) that it is hard to credit how a self-declared liberal could have ever agreed to deliver it. How quickly BoJo has become Napoleon and decided to work with those Whitehall and establishment architects of managed decline and dependency – if not of revolution.

Last night he could have followed the 20-plus European nations and many others round the world who’ve begun lifting their lockdowns – the Czech Republic on April 9, Denmark reopened schools on April 13 and Germany started its ease-up nearly three weeks ago – had he not already brainwashed 70 per cent of the population into fearing the spectre of a second spike. Instead he chose the Stalinist route of Scotland’s ‘stay at home’ nanny, Nicola Sturgeon.

Are we really meant to believe that he still believes that: ‘It is a fact that by adopting those measures we prevented this country from being engulfed by what could have been a catastrophe in which the reasonable worst case scenario was half a million fatalities’ when so many reputable scientific refutations have shown this to be entirely unreasonable?

How otherwise are we to account for his paralysis? Could he be suffering from a form of Stockholm syndrome after his own brush with the virus, and possibly death, so that he genuinely believes that only his Whitehall masters and SAGE acolytes can stop the world from dying of Covid-19 and that he must therefore follow their diktats?

Otherwise we are forced to accept that this is a man of no conviction, courage or character who only ever wanted the trappings of office. We at TCW never believed he was a conservative, now he has shown himself not to be a liberal either. His bottling it on the day of the Referendum result was but one insight into his character and his mismanaged and irresponsible private life has provided several more. We always feared he was not a man to be relied on – even over Brexit. It seems we were right.

Yet he’s commanded more support and goodwill than any other British political leader since Tony Blair. The Telegraph still wills him along, trying vainly to maintain the myth he’s a strong leader, yesterday running the desperate headline ‘PM doubles down on “stay alert” slogan before he addresses the nation’.

Stay alert? After stunning the nation into a ‘stay at home’ stupor? The Telegraph should know, the Prime Minister should know, that slogans are not a policy. They are, as one comment on the Times’s cartoon said, ‘so much childish nonsense’.

The brutal truth is that the trademark bumbling persona Johnson’s fans love is no match for Whitehall’s self-interest and hubris.

The government’s response to the coronavirus – whether or not it be the fault of terrible scientific advice and poor public health warnings – is indefensible. It has gone, as we set out on TCW well in advance of the MSM, from complacency to sheer risky to unjustifiably draconian – the last to catastrophic economic effect while based on crudest of modelling.

Defending it solely because late in the day Labour are opportunistically laying into the Government’s handling of this crisis is indefensible.

Lockdown hawks (from the right, left or centre), my co-editor Laura Perrins says, need to be held responsible for the mass unemployment, probable inflation, increased suicide, depression, despair, illness and deaths caused by delayed NHS treatment that are bound to follow. She is right.

She is also right that any comparison of Johnson with the greatest war leader of the West – whose warning on VE day that ‘our work (for liberty) was not yet done’, remains prescient – is egregious. Boris Johnson has turned out not just to be an abysmal leader but a truly terrifying disappointment.