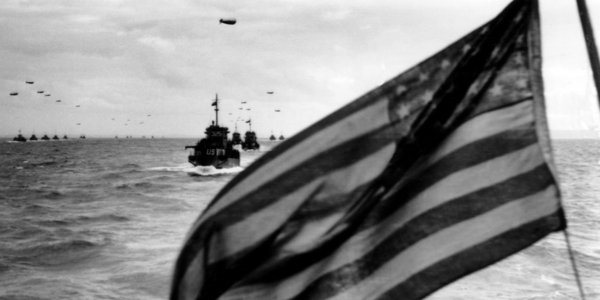 To mark today’s 75th anniversary of D-Day, we are re-running this tribute from one year ago.

Today is the 74th anniversary of the 1944 D-Day landings. To mark it, I urge you to watch Ken Burns’s epic series on America and World War II, simply titled The War. Each episode is more than two hours long.

The series meticulously documents WWII from the American viewpoint, recording the fierce battles both in the Pacific and Europe. They fought and died in this war, ordinary, young American men, on a volunteer basis, because their country asked them to.

The D-Day landings are particularly harrowing to watch, this desperate attempt to liberate Europe from the Nazis. It was a close-run thing. Some beaches were taken with relative ease, but not Omaha and Utah. The Americans were bogged down in Omaha, shells raining down upon their heads.

The American, British and Canadian troops took it only by defying orders and moving up the beach-head, as well as bringing their military boats very close in, risking their destruction, to shell the Germans. The success of the D-Day landings was not inevitable and defeating Hitler was not inevitable. Soldiers gave their lives to make it happen.

I watched this series with humility, imagining what it must have been like to stand on those landing boats knowing you were looking at almost certain death. I still don’t quite understand how those American soldiers did succeed or indeed how those who survived could continue after the war. The shell-shock must have been profound.

Ten days after the landings, American bodies lay all over the beach. Those who survived tried to burn the corpses, but for days that followed more and more bodies were washed ashore. The English Channel continued to give up its dead.

The liberation of France that followed was no mere footnote either; the Germans made sure the Allies earned every mile. They did earn it, these young American men from small American towns liberating France, town by town, village by village.

They didn’t have to do it, but they did. How many would do it now?

If you have Netflix you should make it your business to watch this series, lest we ever forget.