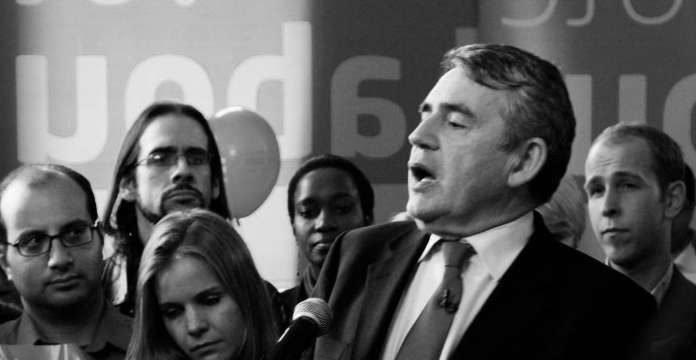 With all the Scottish referendum polls showing a significant tightening of the race, the lack-lustre Better Together Campaign has committed yet more mistakes this week that are tipping the balance in favour of a Yes vote.

The first is to wheel out Gordon Brown as the self-styled saviour of the Union.

Mr Brown, the political equivalent of an absentee landlord, rarely seen in Parliament and very much associated with the old politics of New Labour, the Iraq War, sexed up dossiers, rendition, Boom & Bust, and sleaze, just reinforces the general negative and outdated approach of the No campaign.

Even among Scots, Gordon Brown is at best a Marmite politician. From 2008 when his personal approval ratings were on the floor across the country with as little as 15 per cent of the public believing he was up to the job of being PM (YouGov poll, July 2008), support for him north of the border was little better and certainly nowhere near a majority.

Critics saw Mr Brown as a deeply unpopular man who was in no small part involved in bringing RBS to its knees, by promoting the purchase of ANB AMRO for £61 billion. Not so much the “saviour of the world” as he famously said of himself, but the destroyer of Scotland’s best loved banks by pushing his friend Fred the Shred Goodwin to make the acquisition.

Let’s not forget that just 12 months after the purchase in October 2008, Mr Brown was forced to pump in £37 billion of new capital into banking system from the taxpayer. Even worse was to follow when, in January 2009, RBS announced losses of £28 billion, of which £20 billion was because of ABN AMRO.  As its share price tumbled further and the bank looked set to collapse, the Treasury was forced to take a 70 per cent stake.

So taking a lecture from Gordon on the economic dangers for Scotland in going it alone is like taking a lesson on democracy and human rights from Pol Pot.

The second mistake is to launch a 12 point “devo-max” plan just over a week away from the referendum. It not only appears desperate, but allows virtually no time to explain what the plan would mean.

Worse still, when you look into the detail on what’s actually on offer, much of the plan was talked about six months ago. So for once I agree with Scotland’s first minister, nothing new and certainly not enough to satisfy the ravenous appetite of the SNP.

Finally, wheeling out Mr Brown and the 12-point plan, reinforces all the problems that have dogged the pro-Unionist campaign since its launch, namely it continues to play to Mr Salmond’s strengths. From the outset, Better Together has failed consistently to set the campaign’s agenda, allowing its positive arguments to be sidelined, forcing debate to focus on the negative consequences of separation: you won’t get the pound, the NHS will crumble, jobs will be lost, investment will stop, the sun will never shine. All very bleak and a complete turn off to many voters, especially the undecided and young.

Mr Salmond conversely has been able to put a positive case, including his back of a fag packet economic plan, playing the emotion-laden nationalist card for all its worth. So effective has this message been, along with the SNP leader’s charisma, the referendum battle is too close to call and he has ensured that in ten years time the Union will be no more.