A window on the world of Leftie lecturers 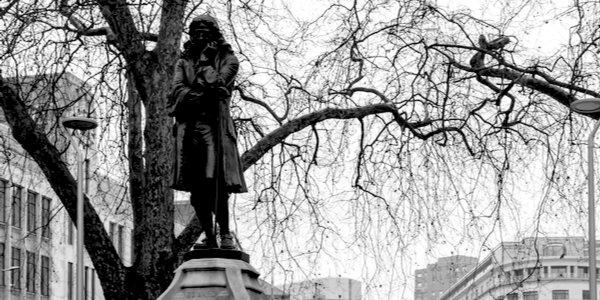 JULIA Hartley-Brewer conducted a fascinating and revealing interview with Dr Kojo Koram last Friday. A lecturer in race and empire at Birkbeck, University of London, Dr Koram could hardly contain his enthusiasm for the illegal removal and submersion of Edward Colston’s statue in Bristol. He pointedly refused to condemn the violence and, at one particularly surreal moment, even claimed that vandalising the statue was both educational and supported by the majority of the British public. It was astonishing: a learned academic not only condoning but celebrating mob rule.

You could be forgiven for being taken unawares by the events of the last week or so. Statues have been toppled, monuments desecrated and national heroes publicly humiliated. It’s indeed been a disorientating time for us all. Why do so many youngsters appear to despise our country? Why are so many immune to reason and seemingly possessed by a visceral, uncontrollable fervour that manifests itself in blood-lust and violence? When you add the complicity of our educated elites and previously respected institutions into the mix – either through actively encouraging and cheering on the rioters or turning a blind eye – you get a perfect storm of bewilderment, confusion and, as an inevitable consequence, anger and frustration.

That’s why Dr Koram’s revelation was so helpful. He represents the source of our current unrest, the womb in which these destructive cultural forces gestated.

Simply put, our universities are to blame. They are the madrassas responsible for this recent assault upon our cultural heritage. Indeed, over the course of the last several decades, they’ve become hotbeds of neo-Marxist thought disseminated and promoted by radical Left-wing scholars such as Dr Koram.

Heirs to a heady mix of Antonio Gramsci, Georg Lukacs and a long line of anarcho-socialist thinkers, they wish to overturn the hegemonic cultural conservatism that, in their eyes, oppresses the less fortunate, whether represented by working class, BAME, gay or transgender groups. For these scholars, Scientific Marxism is inadequate to the task: oppression is not only experienced through economics; it’s also experienced through culture and religion. That’s why our statues, monuments, art, even television programmes are under attack. They are seen as instruments of oppression.

And if you believe I’m being alarmist and reductive, that Dr Koram is one man, unrepresentative of the university sector as a whole, consider this: a 2017 survey conducted by the Adam Smith Institute found that eight in ten university lecturers were Left-wing. According to the report, ‘conservative and Right-wing academics are particularly scarce in the social sciences, the humanities and the arts’, and, as a consequence, universities are ‘afflicted by groupthink and a dysfunctional atmosphere where key assumptions go unquestioned, dissenting opinions are neutralised, and favoured beliefs are held as sacrosanct’.

In addition, signalling their underlying desire to subsume and suffocate our cultural particularism as embodied in the nation state – which, let’s not forget, they view as oppressive – nine out of ten university staff backed Remain during the EU Referendum. This phenomenon isn’t just the preserve of the UK. A 2016 study conducted in the US found that Left-wing university professors outnumbered their conservative colleagues by 12 to 1. It couldn’t be clearer. The Left has a stranglehold on the dissemination of ideas throughout our great educational institutions. Furthermore, it has increased this stranglehold over the last five or six decades.

Think, for one moment, what this means. Academics are brainwashing impressionable kids who – armed with a bit of knowledge and the passion, naivety and arrogance of youth – are deployed as shock troops, violently railing against perceived, largely mythical inequalities, and practically applying the trite, unoriginal anarcho-Marxist theories of their tutors.

They have also indoctrinated the politicians, Silicon Valley hipsters who patrol and police the web, right-on journalists and broadcasters: all those university-educated elites who provide the rioters with covering fire and control the narrative. They, too, are sympathetic to the protesters’ demands, for the simple reason that they’ve been inculcated with the same worldview that sees oppressor and oppressed in just about everything.

Okay, you might say, but many of the protesters aren’t university-educated neo-Marxists. You’d be right. But they’ve been exploited by groups such as Antifa and Black Lives Matter. These are the groups orchestrating the cultural revolution taking place, and they are very much led by university-educated neophytes. Take Black Lives Matter as an example. This radical, extremist group which calls for nothing less than the abolition of the police, the nuclear family and, among other things, the destruction of capitalism, was set up by Alicia Garza, a devout Marxist and sociology graduate from the University of California, San Diego. Her comrades-in-arms, Patrisse Cullors and Opal Tometi are, again, like Garza, Left-wing graduates.

Furthermore, as mentioned earlier, they’re being tacitly, sometimes explicitly, supported by our cultural and political elites – elites imbued with the same worldview as the iconoclasts. Even our police appear to be sympathetic to the cause.

It’s quite incredible when you think about it. Those who extol the virtues of a university education the most – its recipients – are the first to forget an important aphorism: a little bit of knowledge is a dangerous thing. By giving their students a half-baked, highly ideological, one-sided educational experience, our universities are failing in their duty to provide a well-rounded, objective view of the world, a failure that’s leading to grotesque displays of intolerance.

Dr Koram did us a huge favour last week. He exposed the insidious source of the cultural vandalism we’ve witnessed over the last week or so. Neo-Marxist academics have spent decades radicalising their students who are now our elites and our cultural vandals. They must be reined in.