A brief history of conservatism (before the Tories loused it up) 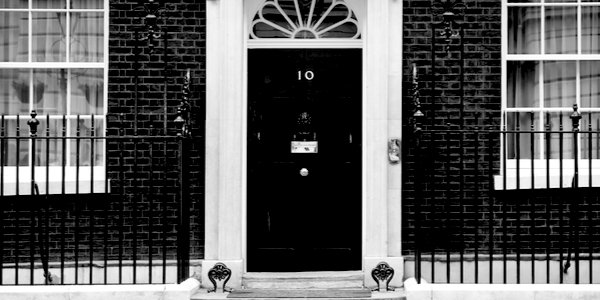 BRITISH conservatism is difficult to pin down. Firstly, unlike America or Israel, Britain does not have a mainstream tradition of religious political conservatism. Although religion does inform some conservatives, it played a more formative role in socialism – a link of which we are reminded every time an archbishop appears alongside Jeremy Corbyn to blame the Tories for poverty.

Consequently, and secondly, British conservatives usually define themselves against dogma – initially Papist and Spanish hegemony, then absolute monarchism at home, followed by continental authoritarianism, socialism, and EU federalism. Standing against dogma makes one reticent to specify one’s own ideas.

Relatedly, and thirdly, conservatism is not as visionary as its opponents, who promise change and reform. For Roger Scruton (the last conservative philosopher in academia), conservatism is fundamentally about tradition and ‘conservation of our shared resources – social, material, economic, and spiritual – and resistance to social entropy in all its forms’.

British political philosophy led the world from the early modern to Victorian eras, but went into decline in the 20th century. Even the leaders of the Conservative Party have not specified conservatism outside party manifestos (Margaret Thatcher is the exception). Most of the current leadership contenders have avoided the label. My content analysis shows a scattered list of specifications – apparently chosen to appeal to the Left. So what is conservatism, before the current Conservative Party messed it up?

British conservatism is anchored in classical liberalism – not to be confused with today’s corrupted meaning of ‘liberal’. A classical liberal prioritises individual liberty – the individual’s freedom to make choices, freedom from authoritarianism – even from the tyranny of democratic majorities (as John Stuart Mill famously articulated).

Some people want a four-way split by separating socialism, but progressives are socialists who have changed name to escape their past. Progressives have an interest in reducing politics to Left versus Right so that they can demonise all opponents as Right-wing. They have tarred conservatism with fascism and Nazism, which were actually socialisms. By conflating authoritarianism with conservatism, progressives hide the inevitable authoritarianism of their social levelling.

Progressives do not prioritise liberty – they prioritise equality, which can only be achieved by illiberal means, because people are not born equal. People are born with varying talents, capacities, and properties. To equalise material property, for instance, means sacrificing inheritance rights or property rights, or appropriating and redistributing property.

Progressivism is anti-meritorious. To stop the talented from rising higher, progressives must pull them down or stop them rising at all. Classical liberals are meritocratic – they expect equality of opportunity without equality of outcomes. Thatcher was articulating this point in Parliament by 1970.  One of her most formative speeches is known by the metaphor ‘Let our children grow tall’, which became the title of her first book. Incidentally, she was already criticising the ‘progressive consensus’ and ‘social justice’ by name – almost 45 years ago!

From the principles of freedom and meritocracy you easily get to justice and fairness. To achieve justice and fairness, you must value law enforcement, policing, and rule-following too. Thatcher laid down her conservatism with the observation that ‘liberty, prosperity, in fact all good things, were impossible without a rule of law.’ From there, conservatives tend to emphasise political accountability and personal responsibility. To illustrate these connections, consider that Thatcher often paraphrased herself to the effect of: ‘The rule of law means that nobody is above the law.’

Fairness ties into the virtues of conservation (what Thatcher called ‘thrift’) and entrepreneurship. Thus, although conservatives are known for limited government, they are interested in using government to protect and reward the virtuous. Taxing hard workers, savers, entrepreneurs, and the self-reliant in order to secure their opportunities is fair, but redistributing to the lazy, feckless and undeserving is unfair. Taxation as a form of contribution to national insurance against unemployment or illness is fair, but excluding contributors from their unemployment benefits or social care because they were wealthy enough to be taxed in the first place is unfair. Taxation to overcome the collective action problem and to fund collective goods, such as public parks, is fair, but taxing the rich just to punish them for being rich is unfair.

Progressives want to level everyone regardless of what they deserve. Worse, they want to reverse privileges, while pretending to be egalitarian. Campaigning against bigotry is fair, but demonising all whites and men is unfair, as is affirmative action for minorities without regard to merit.

Patriotism is consistent with conservatism, while progressives sneer at Britain as imperialist, elitist, racist, and paternalist. Progressives even reverse those prejudices by asserting fuzzy alternatives (feminism, anti-colonialism, social justice). Thus, perversely, ‘minority’ nationalisms (Scottish, Welsh, Irish) and anti-nationalisms (foreign multi-culturalism and pan-European federalism) are acceptable to the Left-wing, and expressed politically by essentially socialist parties (eg the Scottish Nationalist Party). English and British nationalisms are fashionably dismissed as Right-wing. Conservatives tend to assert their British patriotism (if at all) with the euphemism ‘unionist’. Indeed, the full name of the Conservative Party is the Conservative and Unionist Party. The unionist part is under threat, as the new Leftie ‘conservative’ MPs tack towards Scottish independence and (contradictorily) pan-European federalism.

The EU is not compatible with conservatism. As Scruton has articulated best, conservatism – by being rooted in conservation and tradition – is defensive of the legacy nation-state. Furthermore, our principles of individual freedoms, limited government, and political accountability make us suspicious of larger political units, higher layers of rule, and shared sovereignty. Thus, conservatives tend to localism, against the trans-nationalism, multi-culturalism, uncontrolled immigration, and general social destructiveness of the left.

Somewhat contradictorily, conservatives tend to globalism economically – particularly free trade – while leftism tends to autarky. Revealingly, the EU propagandises itself as a liberal champion of free trade and internationalism, but is actually only internally free to trade. To the outside world, the EU is protectionist. Even the internal ‘freedom’ of trade is somewhat mythical because of over-regulation, under-enforcement, and favouritism (to Francophone countries, most obviously).

This is not an exhaustive list of conservative principles and values (I have only scratched the surface of the economics of Thatcherism, for instance), but I have already run out of space.

I shall conclude by adding a column (showing the principles and values identified in this article) to the table that I published in my previous article which summarised the specifications of conservatism as offered by the current Conservative Party leadership contenders (ordered from left to right according to how many votes they earned from MPs on Thursday). 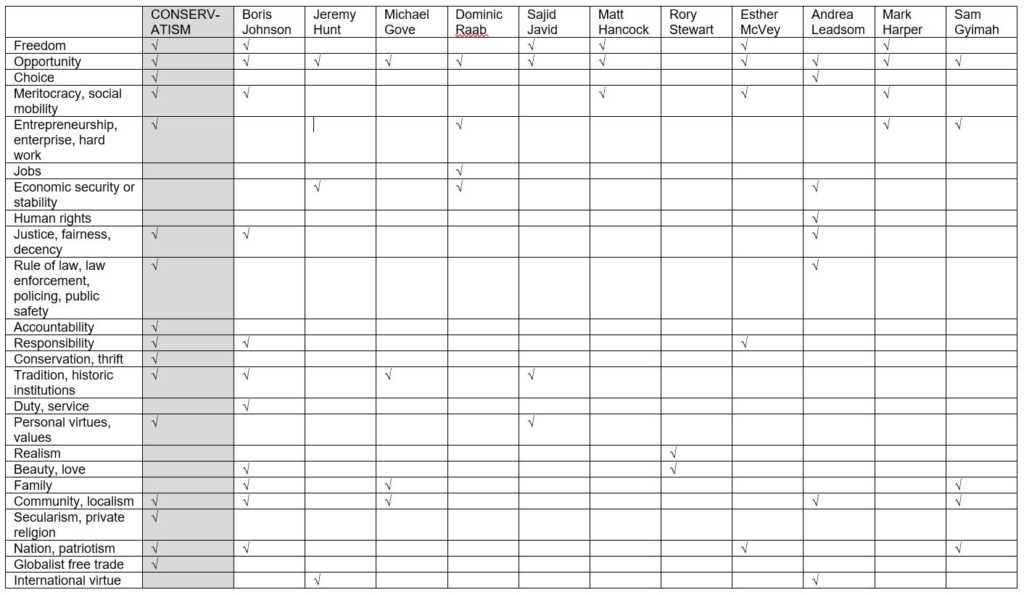 Note how far away from classical conservatism is the current Conservative Party elite!